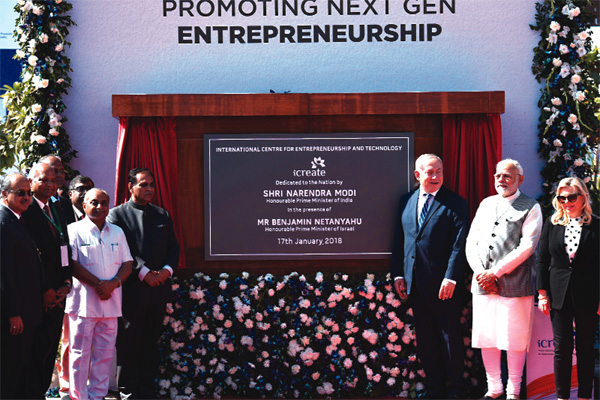 Agencies, New Delhi/Ahmedabad India-Israel relations got a major boost on Wednesday as opening new vistas both the Prime Ministers Narendra Modi and his ‘friend’ Benjamin Netanyahu expressed optimism of developing future technologies jointly by forging entrepreneurial alliances. Both the leaders also inaugurated a newly-built campus of International Centre for Entrepreneurship and Technology (iCreate) near Ahmedabad. Addressing a gathering at Vadrad in Sabarkantha district, Prime Minister Modi underlined that modern science can play a major game changer role and help develop agriculture even in water-starved landscapes like Israel and Gujarat. “It is a myth to consider that you need abundant water to ensure farm growth and boost production. Israel has proved that every droplet counts. Emphasis should be on making optimum use of water,” Prime Minister said after visiting the Centre of Excellence for Vegetables here alongside Israeli Prime Minister. Mr Netanyahu once again displayed strong warmth in the personal rapport between him and Mr Modi and said in Hindi, “Dhanyavad mere pyare dost (Thank you my dear friend)”. Mr Netanyahu also on Wednesday became the second global leader to undertake a mega 8-km roadshow alongside Prime Minister in his home state of Gujarat. The two leaders embarked on an eight-km long roadshow from the Sardar Vallabhbhai Airport to the historic Sabarmati Ashram Last September, Mr Modi staged a roadshow with Japanese Prime Minister Shinzo Abe. Mr Netanyahu also said that his government’s specially designed ‘International Development’ scheme is being used abundantly in Africa and can be made use of in India as well. Set up under the Indo-Israel Agriculture Work Plan for exchange of advanced farming technology, the Centre of Excellence (CoE) for Protected Cultivation and Precision Farming on Vegetables at Vadrad village near Prantij in Sabarkantha district provides training and guidance in controlled farming techniques. The centre also runs a successful Plug Nursery farming. Farmers shared their experiences and briefed the two leaders on how the Centre has helped change theirentire perception of farming. “We already have 20 such centres across India and soon we will have 30 of them,”Israeli PM said.