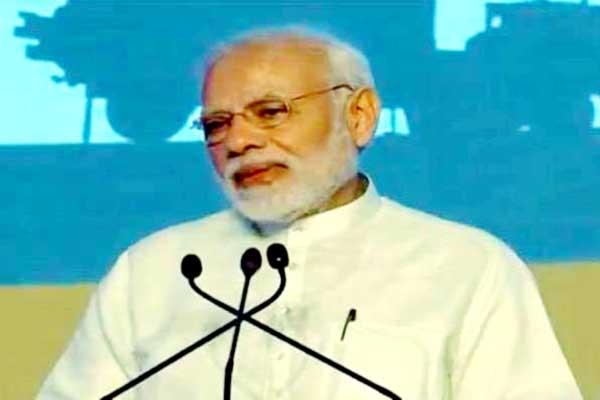 Chennai, Amid growing political turmoil over the emotive Cauvery issue and black flag protests by the Opposition parties, Prime Minister Narendra Modi arrived here from New Delhi on a short visit, on Thursday. Mr Modi, who arrived by a special aircraft from New Delhi, was received at the Airport by Tamil Nadu Governor Banwarilal Purohit, Chief Minister Edappadi K Palaniswami, Deputy Chief Minister O Panneerselvam, Chief Secretary Ms Girija Vaidyanathan, Union Ministers Nirmala Sitharaman and Pon Radhakrishnan and others. After a brief reception, he left for Mamallapuram, about 55 km from here, by a helicopter, from where he would reach the temple town of Tiruvidanthai by road to formally inaugurate the Defence expo-2018, which began here on Wednesday. Later, he would reach Airport and take the road route to the Adyar Cancer Institute where he would unveil its diamond jubilee plaque. He would leave for New Delhi after the Adyar function. Earlier, a press conference was planned with the Prime Minister at the IIT-Madras, adjacent to the Cancer Institute, amid heightening tension and protests over the Cauvery row, but it failed to materialise. Police have made tight security arrangements in view of Mr Modi's visit and also due to the protests by the opposition and fringe parties and farmers organisations, as the Cauvery issue kept the political pot in the state boiling. Meanwhile, opposition parties, including the DMK, various fringe outfits and Tamil Organizations greeted the Prime Minister with black flag protests to condemn the Centre for failing to set up the Cauvery Management Board (CMB) and the Cauvery Water Regulatory Committee (CWRC) as directed by the Supreme Court.