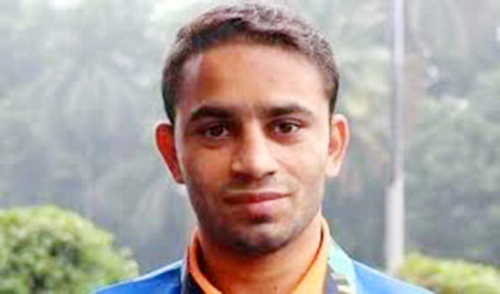 New Delhi, Asian Games gold medallist Amit Panghal was nominated for Arjuna award by the Boxing Federation of India here in the capital on Tuesday. Addressing the felicitation ceremony of the Asian Boxing Championships medallist, Ajay Singh, BFI president, said, 'Delighted by his performance, we are happy to announce that we nominate Amit Panghal for this year's Arjuna Award '. Amit won gold this year after beating Korea’s Kim Inkyu in his new 52 kg weight category in the Asian Boxing Championships at Bangkok. Amit also expressed his delight and thanked BFI, SAI and MYAS for the recommendation. He said, “I am honoured to be nominated, I can’t describe how happy I am. I am confident that this year I will get the Arjuna Award for sure. I have continously performed well and will try to clinch gold in future tournaments'. Last year, also he was nominated for the Arjuna Award by BFI , second highest sporting honour after the Khel Ratna.However, he was not considered after he failed a dope test in 2012, for which he served a one-year ban. Showing his class, Panghal won the gold medal at the Strandzha Cup in Sofia in Feb 2018 and he also won the silver medal at 2018 Commonwealth Games in the light flyweight category. Indian boxing contingent finished their campaign with a best-ever haul of 2 gold, 4 silver and 7 bronze medals, a record tally of 13 medals at the Asian Boxing Championships 2019 in Bangkok, Thailand on Friday.