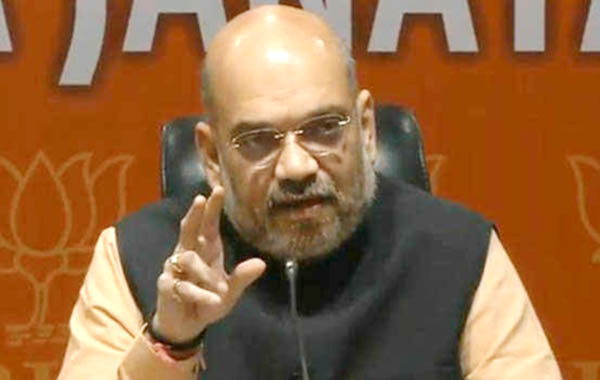 New Delhi, BJP national president Amit Shah on Tuesday asserted that the National Register of Citizens in Assam should be implemented in letter and spirit "firmly and fairly". Addressing a press conference at BJP headquarters here, Mr Shah reminded the Congress leadership that in 1971 the then prime minister Indira Gandhi had herself stated that "no Bangladeshi 'ghus petiya (infiltrator)" will be allowed to stay in India. "I will ask Congress president Rahul Gandhi does he stand by the words of his grand mother," said Mr Shah, who earlier in the day during discussion on NRC in Rajya Sabha said NRC essentially was a Congress idea but they did not have courage to implement it. To a question, the BJP chief castigated Trinamool Congress chief Mamata Banerjee and said the West Bengal Chief Minister has developed a habit of speaking and doing things which only have vote bank implication. "Mamataji sees nothing other than vote bank.....everyone has their own prism, we see national interest and she is looking at other things," the BJP chief said in reference to Ms Banerjee, who is camping in Delhi and has sought an appointment with Home Minister Rajnath Singh on NRC issue.