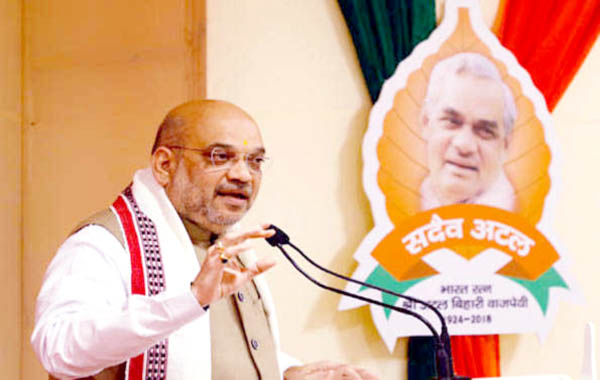 New Delhi, Setting the tone for what looks like a high pitched and acrimonious election season in months ahead, BJP chief Amit Shah on Saturday blasted out at the Opposition parties for pursuing 'a disruptionist' and 'break India' agenda and said it was sheer vote bank politics that is guiding the opposition camp's reactions to recent crackdown on urban Naxals. Mr Shah exuded confidence that the party has only emerged stronger in recent times and thus it will be able to win the crucial battle of 2019 - the next parliamentary polls - with a much 'bigger' margin and more convincingly than it did in last Lok Sabha polls. In his presidential address to the BJP national executive meet being attended by Prime Minister Narendra Modi among others, Mr Shah flagged off key issues like Triple Talaq and National Register of Citizens (NRC) and said "many Islamic countries have the law against such a practice". Quoting him, briefing reporters Defence Minister Nirmala Sitharaman said: "Triple Talaq is not an issue in many Islamic countries but in the Rajya Sabha due to hypocritical stance of the Congress party, it is stuck up". BJP is firm about passing the draft legislation, the party president told the senior party leaders drawn from all across the country for a two-day meet billed as strategy conclave for the ruling party ahead of ensuing assembly elections in five states and in the run-up to the vital battle for 2019. "Flagging off the urban Naxal issue, the party president said, the Opposition parties are only raising it as a vote bank political issue," Ms Sitharaman said adding in this context, the party president categorically lauded the role of the Maharashtra government and also state Chief Minister Devendra Fadnavis for pursuing the matter vigorously. On the NRC issue, the party's firm stance is nothing new, Mr Shah reminded the party colleagues and said as many as nine times, the party has passed resolution on the same. "Therefore, we will pursue the issue with all sincerity and commitment". Mr Shah dismissed the idea of 'grand alliance' by the Opposition parties and described such an attempt as only a combination of 'dhakosla (eyewash), jhoot (falsehood) and bhranti (mirage)'. Mr Shah lashed out at the Congress party for pursuing its 'break India' agenda as against BJP's constructive mission of 'Make in India' under the leadership of Prime Minister Modi. On the sustained attack against the BJP-led government on the state of economy in the country, especially on issues like joblessness and fuel prices, in his address Mr Shah exhorted the BJP workers at all levels to challenge the Congress leaders like P Chidambaram and others for "debate" on economy and government's performance "with facts and figures".His argument being things have been handled very efficiently by the Modi government. Ms Sitharaman said in his address, the BJP chief also said that the party workers should tell the people of the country at every level that the Modi government's welfare schemes have touched the lives of all sections of Indians and helped them. Mr Shah also sought to compare incumbent Prime Minister Narendra Modi with his predecessor Dr Manmohan Singh saying, there was an elementary difference between the two as "Dr Singh only follows his party while Narendra Modi leads the BJP from the front". The BJP president exuded confidence that the saffron party will do well in states like Telangana and Mizoram along with three BJP-ruled states of Rajasthan, Chhattisgarh and Madhya Pradesh. "In Mizoram, we will soon organise a meeting of 10,000 party workers," he said, adding the saffron party has thus made deeper penetration in northeastern states too. Mr Shah maintained that in states like West Bengal and Odisha, where BJP has lately emerged as number two electorally, the party workers will put up a good show too. Prime Minister Modi will address the meeting on Sunday.