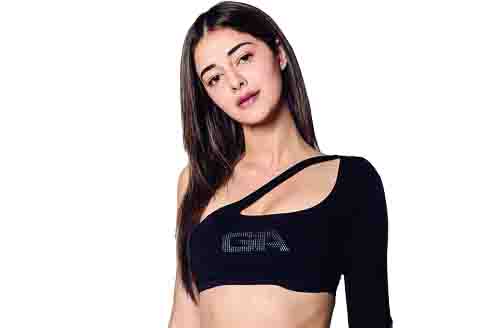 Ananya pandey is currently one of the most popular actress on the the social media. The Pati Patni aur Woh actress slayed the year by bagging several awards and appreciation for her work, not only acting but the starlet is also a millenial fashion icon for many of her followers and never fails to impress them. She recently shared pictures of herself on Instagram skillfully captured by Nupur Aggarwal.

Ananya look extremely hot in the shoot, done in the GIA Sports ensemble. Which is an asymmetrical sports bra with single sleeve and a flirtatious neck cut timed with matching jogger pants along with in-built buckle belt. The actress has minimal makeup on her and her hair is straightened and left open. She divergently pairs the attire with a stylish double T - strapped pair of black heels.

Though the heels match the ensemble but are an unusual combination with sports gear. Ananya is overall styled by the celebrity stylist Tanya Ghaveri. Ananya will be next seen in Maqbool Khan’s upcoming thriller film Khaali Peeli along with Ishaan khatter, Satish Kaushik, Jaydeep Ahlawat and Deshna Duggad. The movie is produced by Ali Abbas Zafar and Himanshu Mehra and is set to release on 12th June 2020.