Anil Kapoor, Aishwarya to reunite after 17 yrs for 'Fanney Khan' 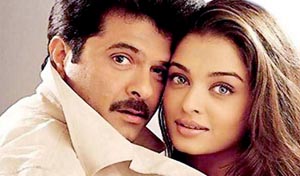 New Delhi, The superhit jodi of 'Taal' Aishwarya Rai Bachchan and Anil Kapoor will be seen recreating the magic on screen after 17 years for the upcoming film 'Fanney Khan'. The duo has worked together in Subhash Ghai's 'Taal' which released in 1999 and Satish Kaushik's 'Hamara Dil Aapke Paas Hai' which released in 2000. The actors last shared screen together in Satish Kaushik's 'Hamara Dil Aapke Paas Hai' that hit the screens in 2000. It will be only after that Aishwarya and Anil would come together for a film with 'Fanney Khan'. 'Fanney Khan' which is Atul Manjerekar's debut film as director will star both the actors in the lead along with Rajkummar Rao. After much anticipation, the makers of 'Fanney Khan' presented the teaser of the film featuring Anil Kapoor, Aishwarya Rai Bachchan and Rajkummar Rao. The one minute long teaser begins with audience cheering for Fanney Khan and Rajkummar Rao’s voice decoding the meaning of the name. A one of its kind musical comedy, 'Fanney Khan' is a story about a father who wishes to fulfill the dream of his daughter who is an aspirational singer. Aishwarya Rai Bachchan plays a singing sensation in the film. Rajkummar Rao will be portraying the love interest of Aishwarya in the film. Gulshan Kumar Presents, A T-Series Films and ROMP Films production, Fanney Khan is directed by Atul Manjrekar and produced by Bhushan Kumar, Krishan Kumar, and nominees of ROMP. Starring Anil Kapoor, Aishwarya Rai Bachchan, and Rajkummar Rao, the film is slated to release on August 3.