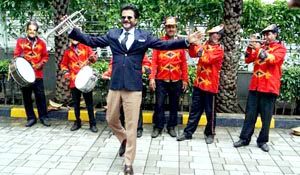 New Delhi, The makers of 'Fanney Khan' are all set to treat the audience with a recreated version of Shammi Kapoor’s iconic song 'Badan Pe Sitare Lapete Hue'. The makers have already shot the song featuring Anil Kapoor. “AK sir’s character who is an orche Mohammad Rafi and Shammi Kapoor as his Gods and sings their songs. This one is his most favourite. You will also see him pull off some of Shammi saab’s iconic moves,' informs director Atul Manjrekar He also said they have not recreated the song for the Bhushan Kumar, Anil Kapoor and PS Bharathi production but have only given it a new voice, retaining the original lyrics and music. Born and brought up in Mumbai, as a child Atul Manjrekar had seen a lot of orchestras, many of them with a junior Mohammad Rafi or Kishore Kumar who besides singing would also perform on a number sung by the originals. 'These orchestra experiences have stayed with me and made their way into the script,' he exclaimed. 'We couldn't use Rafi saab’s voice as Anil Kapoor's character sings in the film. At the same time, we wanted someone who would do justice to our tribute to the original. It was AK sir who suggested Sonu’s name and all of us instantly agreed because who better than him to do justice to this great song,' the director said. Anil was extremely excited to be a part of the song as his filmmaker-father, Surinder Kapoor, had worked with Shammi Kapoor and he would visit the actor’s house and spend a lot of time with him. 'In fact, as a child he even sang and danced to this particular song and his eyes lit up when I had discussed the idea with him,' Atul signs off with a laugh. So after 'Mohabbat' and 'Halka Halka', the audience will be treated with yet another musical treat with 'Badan Pe Sitare'.The film is all set to release on August 3.