Anwli Ghat to be developed as religious tourist center 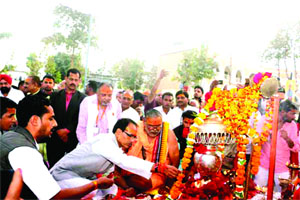 Chronicle Reporter, Bhopal Chief Minister Shivraj Singh Chouhan unveiled 71 feet high idol of Lord Shankar after performing pooja archana at Anwli Ghat of Seoni Malwa –district Hoshangabad today. He also dedicated newly constructed rest house at Anwli Ghat. CM Chouhan said that Anwli Ghat will be developed as a religious tourist center. He mentioned that it will be developed on the lines of Har ki Podi. While making announcement for opening of Girls College at Dolariya from July, he said that positive initiative will be taken to open girls college at Seoni Malwa. Chouhan stated that damage has caused to crops of 10 to 12 villages of Hoshangabad district due to hailstorm and this losswill be compensated by the state government. Informing about the Bhavantar Bhugtan Yojana, that necessary improvements will be made in the scheme as per the requirement. Now farmers do not need to bring whole crop in mandi. They can keep their crops for 4 months in warehouses. Rent of warehouses will be borne by the government. He further mentioned that such an arrangement together with banks is being made that farmer should get 25 percent value of their produces kept in the warehouse immediately. CM Chouhan that defaulter farmers should pay principal amount in 2 installments, interest will be borne by the government. He further said that if farmer repays his/her Rs. 10 thousand loan, an amount of Rs. 15 thousand will be given on zero percent interest again. CM Chouhan was welcomed by Lodhi-Lodhi Samaj presenting him a garland weighing 61 k.g. Farmers and Office Bearers of Cooperative Bank also accorded welcome to the Chief Minister. Speaker Vidhan Sabha Dr. Sitasaran Sharma, President Jila Panchayat Kushal Patel, MLAs Vijaypal Singh, Thakur Das Nagvanshi, Sanjay Shah, Chairman Mineral Development Corporation Shiv Choubey, Member State Antodaya Committee Harishankar Jaiswal were present on the occasion.