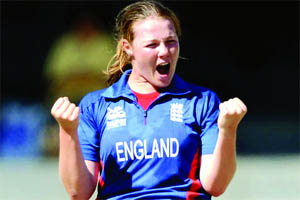 Agencies, London Anya Shrubsole, vice captain of England women’s cricket team has been awarded with ICC spirit of cricket award for showing Sportsmanship in July at Bristol, after she immediately went to comfort the distraught Proteas captain Dane van Niekerk.She received the award at the world governing body’s annual prize giving on Thursday. The ICC said that Shrubsole had displayed humbleness and exemplary sportsmanship through her act on the field.Shrubsole, 26, a nominee for BBC Sports Personality of the Year, “displayed humility and exemplary sportsmanship,” the ICC release stated. Her act on the field reminded the similar moments between Adrew Flintoff and Brett Lee during the 2005 Ashes. One can also retrieve the incident which took place between Grant Elliott and Dale Steyn after the 2015 World Cup semi-final between New Zealand and South Africa. The Spirit of Cricket award is decided by the ICC’s elite umpires panel and chief executive.Besides ICC spirit award, she became the first female cricketer to receive the Christopher Martin-Jenkins Spirit of Cricket award - created by the BBC and MCC in memory of the former Test Match Special commentator in September.