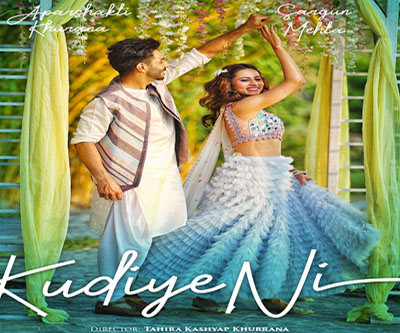 Agencies, New Delhi Making his own space as a new Mr Dependable in B-town, Aparshakti Khurana, who has kept us hooked by his stellar performances right from 'Dangal', 'Stree' to 'Luka Chuppi', is now all set to debut with his first song 'Kudiye Ni'. Presented by T Series, sung and composed by Aparshakti Khurana, the song features him alongside gorgeous actress Sargun Mehta. The song marks his debut as a singer and composer which is directed by Tahira Kashyap. The female part is voiced by none other than Neeti Mohan. An excited Aparshakti said, "I am thrilled to announce that my debut song #KudiyeNi is all set to release on May 31st! Of course this would not have been possible without Bhushan Sir’s support and a few more lovely people who made this happen, and I want to take this opportunity to thank them for their efforts.' 'Starting with John Edward Eduri and Aditya Dev for giving me a few days from their lives and arranging and programming music for me. Neeti Mohan for being the best co-singer! Sargun Mehta for being the face of this song alongside me! She is really pretty. My wonderful sister-in-law Tahira Kashyap for directing this video and last but not the least, my life Aakriti Ahuja for multitasking in every way possible,' he said.