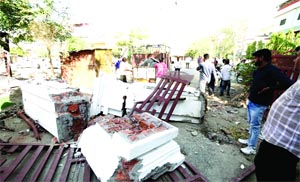 Chronicle Reporter, Bhopal Most Rev. Leo Cornelio, Archbishop of Bhopal strongly condemned the attack on Pushpa Mission Hospital on 12th March 2018. It is a systematic planning to bring disturbance and violence among peace loving community. This type of violence will not be tolerated any more. I ask the authorities to take action on culprits immediately. It’s a cowardly action to destroy the hospital when the Governor was visiting the Ujjain city. Pushpa Mission Hospital working under the Syro- Malabar Diocese in Ujjain, Madhya Pradesh, was attacked on 12th March, 2018, by a group of people who even behaved roughly with the working nurses in the hospital. The attackers used harmful weapons to create conflicts that disturbed the peaceful atmosphere in the central Indian city of Ujjain. The group that came with a JCB damaged the hospital gate, generator and destroyed electricity and water supply of the hospital creating a fearful scene and troubling the patients and the staffs. Nurses who tried to stop the attackers were harmed and beaten up brutally. The reason for the attack is unknown. A known political party and its leader are alleged to have operated this attack. The attacks claimed that a local court has authorized them to occupy the disputed site but the Church officials have denied it by saying that the charges against them were framed under political influence. A delegation led by bishop of Ujjain, met the Governor and briefed the situation. The Governor listened to the matters very seriously and promised to take action. Fr. Maria Stephen, the PRO of MP Region, said in his statement that- the entire Catholic Church is shocked to know the planned attack on mission hospital. We the minorities feel unsafe in the midst of repeated attack on the Church personnel and institutions. We want an explanation why the hospital has been attacked? There were nearly hundred people launched the attack on the front yard of emergency gate of the hospital, dug of the exit and pulled down the compound wall. They even put up iron fencing on war footing inside the premise of the hospital. Despite several police vehicle passing by, not even a constable has turned up at the site while hooligans sitting at the encroached hospital front yard and abusing the media when they asked for explanations. Pushpa Mission Hospital was founded on December 1, 1974. It was a time when no healthcare facilities were available in villages and no awareness of health care programmes were present. In the beginning stages, the reverend sisters and doctors went to the villages and conducted many medical camps, supplied free medicines and tried to make them aware of the importance of health and dignity of human life. Let us pray for the Church officials and the hospital authorities and stand together in prayers against the increasing religious persecutions in the country.