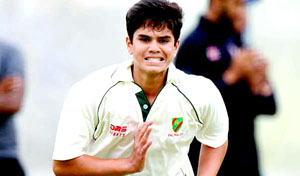 Mumbai, Arjun Tendulkar, son of cricket icon Sachin Tendulkar, has been included in the Indian U-19 cricket squad for the Sri Lanka tour starting in July where the tourists will play four-day and one-day matches.The young all-rounder has been named for the two four-day matches against Sri Lanka. Delhi wicketkeeper-batsman Anuj Rawat will take the charge for the four-day squad, while the one-day squad will be led by Aryan Juyal. In 2017-18 Ranji Trophy Anuj Rawat made his first-class debut for Delhi. He was earlier picked for the U-19 Asia Cup 2017 while Aryan Juyal, who had made his List A debut for Uttar Pradesh in Vijay Hazare Trophy. Arjun was quite impressive in the global Twenty20 series in Australia, organised by the Sydney Cricket Ground in January earlier this year.The youngster was also applauded by the Australain media after garnering four wickets in as many overs at the Bradman Oval and blasted 48 off 27.