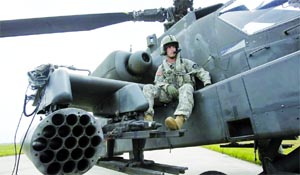 Agencies, Washington The Trump administration is putting the final touches on a plan to dramatically increase American military hardware sales around the world, paving the way for faster and bigger deals with a range of countries from Eastern Europe to Southeast Asia that have faced limits and barriers to buying from U.S. defense firms. While administration officials have remained mum on the soon-to-be-released policy guidance, the impetus driving the new weapons export rules is twofold, said one U.S. official with direct knowledge of the administration’s plan. Administration officials want to further expand America’s already significant share of the global arms trade while persuading longtime allies not to shift to Chinese, Russian or Israeli-made suppliers that don’t face the same barriers. “The logic behind this is that we need to do better and faster at approving deals with countries that we know are going to go elsewhere and buy from China, Russia, France, Australia, Israel if the U.S. is too slow in the approval process,” the official said. The new policy features a streamlined process for approving arms deals while working with American defense firms to develop cheaper, more exportable versions of American arms.That move could open the door for sales to countries that Washington has traditionally shied away from, industry sources said. American defense industry giants such as Lockheed Martin and Boeing already manufacture scaled-down versions of their premier weapons platforms for international consumption. But federal guidelines on the sales of certain technologies — such as unmanned aircraft or long-range missile systems — include restrictions to ensure that the foreign purchasers do not use those weapons on their own people.