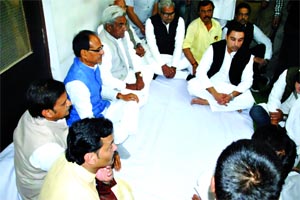 New Delhi,  Ayushmann Khurrana starrer 'Article 15' which has gripped the nation with its investigative drama genre reminding us of the history based on true events, has kept a stronghold on the box-office with the total of Rs 46.21 crore on the tenth day. The investigative drama, which has struck the right chord with the audience fairs well on a Sunday, scoring Rs 46.21 crore in total.  The film features Ayushmann in a never-seen-before cop avatar with a heroic element to the character. With a no-nonsense appearance, the character has already become a hit among the audience with a realistic portrayal. 'Article 15' has a stellar support cast of Isha Talwar, M Nassar, Manoj Pahwa, Sayani Gupta, Kumud Mishra and Mohammed Zeeshan Ayyub who deliver a power-packed collective performance along with Ayushmann, an actor who has a profound ability to identify great scripts. The Anubhav Sinha directorial, 'Article 15' released on June 28 and the film definitely has gripped the nation with its catchphrase, 'Ab farq laayenge' and the numbers are proof enough to say that the audience is loving the movie.