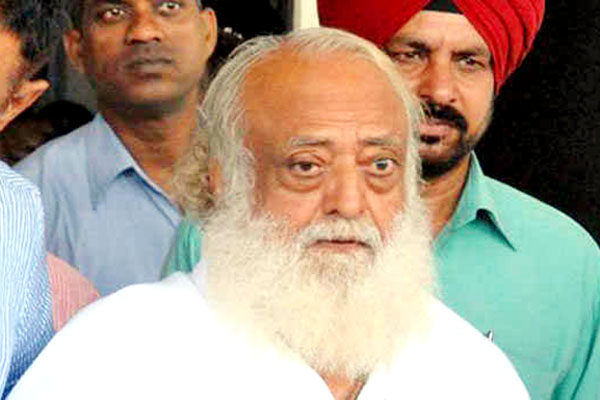 Jodhpur, A Jodhpur court on Wednesday sentenced self-styled godman Asaram Bapu to life imprisonment in a 2013 rape case involving a 16-year-old girl at his Chhindwara, Madhya Pradesh, ashram. Fearing a redux of the Ram Rahim Singh episode, Delhi, Rajasthan and Madhya Pradesh were on high alert.Section 144 was in force in Jodhpur, apprehending violence by Asaram's supporters.Asaram, visibly moved, said he would appeal in the High Court of Rajasthan. Pronouncing the verdict at a makeshift courtroom on the prison premises, Judge Madhu Sudhan Sharma handed down 20-year-jail terms to two of Asaram's accomplices, Shilpa and Saratchandra.Prakash and Shiva were given a clean chit.The wheels of justice Agencies reported from Shahjahanpur, Uttar Pradesh, that the father of the rape victim hoped that the witnesses who were murdered or kidnapped get justice, too.He also thanked the women organisations and people of Shahjahanpur for their support in this hour of crisis. Asked about coercion in the case, he said ,"Everyone and even the media knows about the threat which has forced our family to stay inside our house under police security." Police in Shahjahanpur were on high alert and additional reinforcements were deployed at the house of the victim.The victim's father came out of the house to meet the media, after the verdict was announced.He said that it was also the victory of his daughter who had suffered the most during the past four years of the trial. In the morning, Superintendent of Police K B Singh visited the victim's family and assured them all security.The case dated back to 2013 when the victim was a twelfth standard student and stayed at the Chhindwara ashram of Asaram Bapu. She was aged 16 when the spiritual guru assaulted her sexually and the victim's father lodged an FIR on August 20, 2013, at Kamla Nagar police station in New Delhi. The case was later transferred to Jodhpur.

In the Capital, opposition Indian National Congress took a swipe at Prime Minister Narendra Modi over a photograph with the self-styled godman, who is also facing trial in two other rape cases. Congress posted an old video of Mr Modi with Asaram on its twitter handle with a caption 'A man is known by the company he keeps" - Aesop's fables '.Communist Party of India (Marxist) affirmed that the case of sexual exploitation of a minor deserved the 'strongest punishment. 'This is a victory for justice in a case which saw the use of violence and intimidation against the victim and her family. Nine witnesses were attacked of which three died. The teenaged survivor showed exemplary courage in these extremely difficult and trying circumstances and is a symbol of the fight against sexual exploitation,' the CPI(M) stated. It said the courts should ensure that other related cases, including those of the killing of the witnesses,should be completed without delay.

Asaram's life has been a roller coaster ride from a tea vendor to a spiritual guru.Born as Asumal Sirumalani on April 17, 1941, his family shifted to Gujarat post-Partition. The financial burden of the family fell on him when his father Thaumal Sirumalani passed away.During 1958-59, Asaram worked as a tea vendor.Asaram and his relatives were also indicted for murder under the influence of alcohol. They were acquitted due to want of evidence. In the 1960s, Asaram turned into a liquor merchant. He later worked in a dairy.Subsequently, he emerged as a self-styled godman with legions of followers.