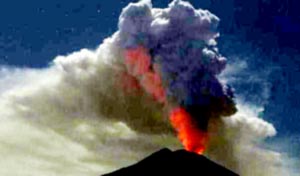 Agencies, Denpasar, Indonesia, Ash from a volcanic eruption on the Indonesian resort island of Bali forced the closure of its international airport and cancellation of hundreds of flights on Friday, while villagers living beneath rumbling Mount Agung began fleeing their homes. The eruption, which began on Thursday, fired a towering column of ash 2,500 metres (8,200 ft) into the sky, and reddish flames lit up the volcano’s crater overnight. Indonesia’s second-busiest airport will stay shut until at least 7 pm local time (1100 GMT) on Friday, with 85 international flights and 191 domestic flights cancelled, affecting nearly 16,000 people, airport authorities said. There was no indication of how long the eruption might last, Sutopo Purwo Nugroho of the disaster mitigation agency said in a statement, and the alert level on the volcano remains unchanged for now. “Micro tremors are still being detected... indicating that magma is moving towards the surface,” Nugroho said. Mount Agung, in northeastern Bali, has erupted with various intensities since late last year and in December the airport was also closed for a period and thousands of residents were evacuated closer to the volcano. According to Nugroho, 309 residents living in a danger area 4 kilometres (2.5 miles) from the crater had voluntarily gone to three evacuation centres on Friday. Airlines avoid flying through volcanic ash as it can damage aircraft engines, clog fuel and cooling systems and hamper visibility. At Bali’s international airport, hundreds of passengers were queuing in the lobby of the terminal to get updates from airlines, while some slept on the floor next to their baggage. “I was very upset when I got to the airport and it was closed. My stuff has been sitting on the ground for 24 hours, and don’t have any accommodation,” Australian traveller Caitlin Bigg said at the international terminal . British traveller Ross Webb said he was bracing to have to extend his stay. “I imagine a lot of people are frustrated trying to get home and so I’m just going to head back to Bali, extend my stay a bit, and see what happens.” Among the airlines serving the resort island, Garuda Indonesia, Sriwijaya and Indonesia Air Asia said they were working to help stranded passengers. Virgin Australia, Qantas and Jet Star were monitoring the situation in consultation with Australia’s Bureau of Meteorology’s Volcanic Ash Advisory Centre, which was due to meet on Friday morning to assess when flights might resume.