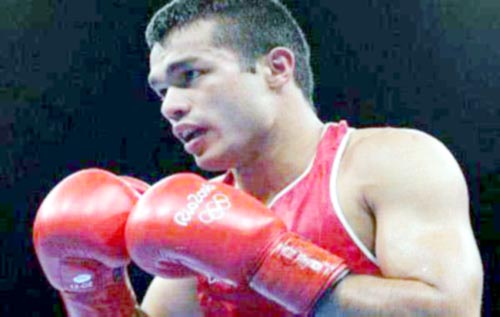 Jakarta, Indian boxer Vikas Krishnan 75kg, has pulled out of his Asian Games on Friday, after being declared unfit due to an eye injury. The 26-year-old was to take on Kazakhstan's Amankul Abilkhan in his last-four clash on Friday evening but has been forced out due to the injury. However, he already, assured of bronze medal after reaching semifinals. He also became the first Indian to win three Asian Games boxing medals in Asian Games. He won a lightweight 60kg category gold in Guangzhou 2010, before winning a middleweight bronze in the 2014 edition in Incheon. The Indian boxer suffered a nasty cut just above his left eye after an accidental clash of heads in the first round of his quarterfinal bout against China's Erbieke Tanglatihan on Wednesday. In boxing competitions, India's eyes are now on 49-kg men's flyweight category, Amit Paghal, who will face against Carla Palam against Carlo Paalam of Philippines in the semi-finals.