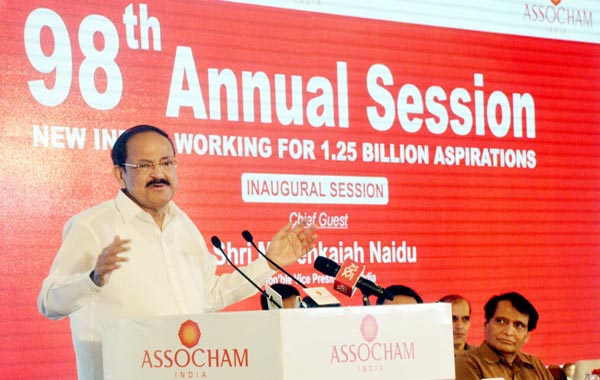 New Delhi, Vice-President M Venkaiah Naidu said on Tuesday that Chambers of Commerce and Industries acts as a bridge between the governments and the industry in creating conducive atmosphere for the businesses to thrive and produce wealth. Mr Naidu released the Commemorative Volume, 'Retrospect 2017-18' where Commerce and Industry Minister Suresh Prabhu was also present. Addressing the 98th Annual Session of The Associated Chambers of Commerce and Industry of India (ASSOCHAM), Mr Naidu said bodies like the Assocham should be in the forefront in promoting corporate ethics by following various reforms initiated by the Government. 'Ethical behavior has to be promoted by individuals as well as organisations by adopting zero tolerance towards corruption, bribery and frauds,' he said. Organisations should also create an environment for whistleblowers to report any wrongdoing without any fear, the Vice-President said. 'Total tax compliance should be the motto of every corporate and bodies like Assocham should sensitise its members on this aspect,' he added.