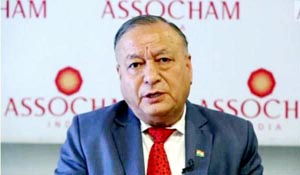 Kolkata, TRAIs recommendation to permit sale of internet services without a licence and licence fee and other statutory levies is highly disruptive in nature and would wreck a huge investment made in the telecom sector, the ASSOCHAM said, impressing upon the government to reject the ill-advised move of the regulator. In a letter to the Telecom Secretary Aruna Sundararajan, ASSOCHAM Secretary General D S Rawat on Tuesday said that the TRAI recommendation that the Internet Services should be sold under a registration, instead of a licence via Public Wi-Fi networks, would mean there would be no liability on the service provider to pay statutory charge,license fee and compliance with any security conditions. “We believe that this recommendation is completely unjustifiable and unwarranted as this would lead to a serious non-level playing field between licensed and unlicensed stakeholders. Doing so will disrupt the entire licensing framework and affect the huge amount of investment already made in the telecom infrastructure. This will widely impact the telecom sector and may also pose a threat to the national security by way of putting individual data at risk of easy access,” the chamber said. “We sincerely hope that the DoT will consider (our) points favorably and will reject the TRAI’s recommendations on PDOAs. If at all, PDOAs need to be introduced then it should be done under a licensing framework only”, it stressed. Contrary to the well-established licensing structure, TRAI in its recommendation has suggested that Public Data Office Aggregators (PDOAs) and Public Data Office (PDOs) be allowed to provide Internet Access through Wi-Fi technology without taking a license. Any such service will be in conflict with the existing licensing framework. “More importantly, establishing Public Wi-Fi Networks without license, will be illegal being in violation of Indian Telegraph Act, 1885”, the chamber letter to the Secretary, Telecom , said. Industry players with a valid license duly pay regulatory levies and follow all regulatory and security compliance. If an unlicensed entity starts providing these services, it would lead to a massive impact on the revenue of licensed operators who are dutifully following all the norms and guidelines of the licensing framework. This will likely render useless the huge investments made by licensed operators in the telecom eco system.