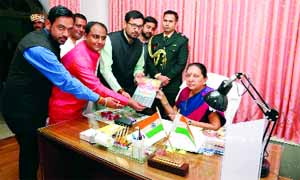 Tokyo,  At least 13 people are dead and nearly 40 injured after a suspected arson attack on an animation studio in Kyoto city of Japan on Thursday. Local broadcaster NHK said that police had taken into custody a 41-year-old man who broke into the Kyoto Animation Co studio and sprayed a flammable liquid around and set fire to it. The suspect, also being treated in hospital for injuries sustained during the fire. About 70 people were believed to have been working when the fire broke out at around 1035 hrs, police said. People near the studio said that they heard a series of explosions and saw black smoke billowing out of the building. Some people also witnessed the man screaming 'Die' as he set fire. They also found knives at the scene. Kyoto's Animation company based in Uji City was founded in 1981. It produces animations, sells anime items and trains animators. The company, also known as KyoAni in Japanese, has produced popular TV animation series "K-On!"