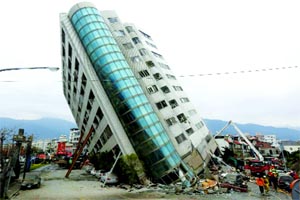 Agencies, Hualien Rescuers combed through the rubble of collapsed buildings on Wednesday, some using their hands as they searched for about 85 people missing after a strong earthquake killed at least four near the popular Taiwanese tourist city of Hualien overnight. The magnitude 6.4 quake, which hit near the coastal city just before midnight (1600 GMT) on Tuesday, also injured 243 people, officials said. The latest figures from government data indicated 85 people were missing. Many of those were believed to be still trapped inside buildings, some of which were tilting precariously, after the quake hit about 22 km (14 miles) northeast of Hualien on Taiwan’s east coast. Two people were trapped inside a badly damaged hotel. The injured included mainland Chinese, Czech, Japanese, Singaporean and South Korean nationals.Aftershocks with a magnitude of at least 5.0 could rock the island in the next two weeks, the government said. Smaller tremors rattled nervous residents throughout the day. Residents waited and watched anxiously as emergency workers dressed in fluorescent orange and red suits and wearing helmets searched for residents trapped in apartment blocks. Hualien is home to about 100,000 people. Its streets were buckled by the force of the quake, with around 40,000 homes left without water and around 1,900 without power. Water supply had returned to nearly 5,000 homes by noon (0400 GMT), while power was restored to around 1,700 households.