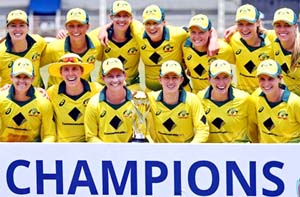 Mumbai, A scintillating 88-run knock by skipper Meg Lanning followed by a decent bowling attack helped the Australian eves thrash England by 57 runs in the summit clash of the Women's T20I series at the Brabourne stadium, here on Saturday. Earlier, the Australian womens had whitewashed hosts India 3-0 in the ODI series and finally capped off their tour on a stunning note. It was also an end to Australia’s wait for a T20 series win, which came after a a long span of almost two-and-a-half years. Put into bat after losing the toss, the yellow brigade were off to a poor start after losing opener Beth Mooney on a duck with just a run on board. However, Alyssa Healy (33) and Ashleigh Gardner (33) shared a 61-run partnership for the second wicket to put things in control.