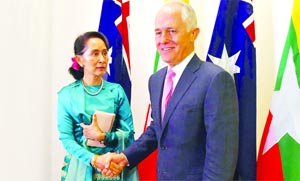 Agencies, Sydney Myanmar leader Aung San Suu Kyi arrived in Canberra on Monday to be met by a military honour guard and Australian Prime Minister Malcolm Turnbull, who has said he will raise human rights issues during her visit. Suu Kyi has been in Australia since Friday, attending a special summit of Association of Southeast Asian Nations (ASEAN) leaders in Sydney, where her presence drew street protests and a lawsuit accusing her of crimes against humanity. Australia’s Attorney General has said he would not allow the lawsuit, lodged by activist lawyers in Melbourne on behalf of Australia’s Rohingya community, to proceed because Suu Kyi had diplomatic immunity. Since coming to power in 2016, Suu Kyi, who won the 1991 Nobel Peace Prize for her struggle for democracy in Myanmar, has faced growing criticism for failing to condemn or stop military attacks on her country’s minority Rohingya Muslims. U.N. officials say nearly 700,000 Muslim Rohingya have fled Buddhist-majority Myanmar to Bangladesh after militant attacks on Aug. 25 last year sparked a crackdown, led by security forces, in Rakhine state that the United Nations and United States have said constitutes ethnic cleansing. The U.N. independent investigator on human rights in Myanmar, Yanghee Lee, said in Geneva this month she saw growing evidence to suspect genocide had been committed. Myanmar denies the charges and has asked for “clear evidence” of abuses by security forces.Neither Suu Kyi nor Turnbull made public remarks before their meeting, but the Australian leader said on Sunday that Suu Kyi spoke “at considerable length” during the ASEAN meeting about Rakhine State, appealing to her Southeast Asian neighbours for humanitarian help.