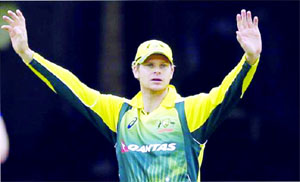 Agencies, Mumbai Steve Smith was announced as the captain of the Indian Premier League (IPL) franchise Rajasthan Royals for the upcoming season at a show hosted by Star Sports on Saturday. Speaking at the appointment of Smith as the captain, Head of Cricket Rajasthan Royal Zubin Bharucha said, “We have some great players and cricketing minds in the team with proven leaders like Steve Smith and Ajinkya Rahane. We came to the conclusion that Steve Smith would be the ideal candidate for the job. Smith has been incredible as captain of Australia. He is someone who leads the team by example.” Both Warne, who was earlier appointed as the mentor of Royals, and Smith are shrewd cricketing brains and fans will be waiting with bated breath to see the Australian combination cast a spell. Warne said the Royals will continue to play intense cricket. “We will play the Royals’ brand of cricket, that is, with spirit and aggression, with which we are known to play with. I am looking forward to exciting cricket and a successful campaign.” Smith, on his part, said he is looking forward to work with his legendary countryman. “Its great to be back with the Royals. It’s an honour and privilege to be leading Royals and looking forward to working with the King (Shane Warne).” Smith had been part of the Rajasthan Royals team in 2014 and 2015.The Royals will kick-off their season with an away fixture against Sunrisers Hyderabad on April 09, followed by a home game against Delhi Daredevils on April 11 at Sawai Mansingh Stadium in Jaipur.