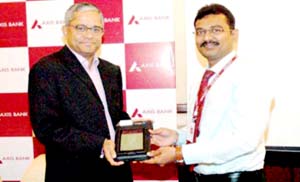 Hyderabad, For the first time in the Indian banking industry, Axis Bank, India’s third-largest private sector bank on Wednesday introduced “Iris Authentication” for Aadhaar-based transactions through micro ATMs. Announcing this at a press conference here, Axis Bank Executive Director-Retail Banking Rajiv Anand who launched the system formally said that the Bank has already been introduced this system in five places in the country on Pilot basis. The system would be introduced across the country in a phased manner once after receiving feed back from them, he said. Mr Anand said that the bank already using micro ATMs with bio-metric authentication. Additionally, the Iris authentication would be added into the micro ATMs. About 100 Iris authentication micro ATMs were ready. He claimed that the Axis Bank was the first Bank in the country to introduce this system. It would be very useful in semi urban area customers, particularly for senior citizens.