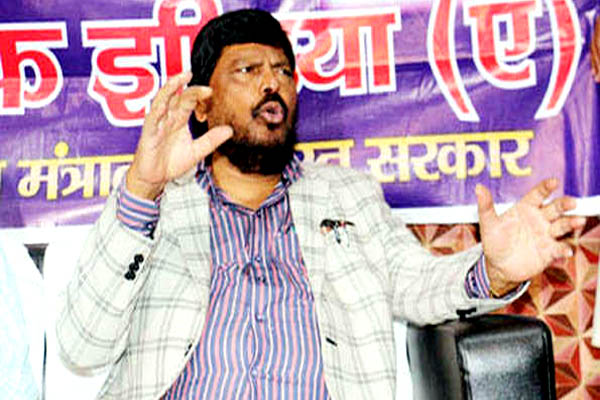 Lucknow,[/caption] Union Minister of State for Social Justice and Empowerment Ramdas Athawale on Wednesday suggested a compromise formula to resolve the vexed Ayodhya issue. Mr Athawale, also the president of the Republican Party of India (Athawale), told reporters here that of the total disputed area of 65 acres of land in Ayodhya, the Hindus should be given 40 to 45 acres to construct a grand Ram Temple and the rest should be allotted to the Muslim side. "If there is an objection for a mosque near the Ram temple then the Muslims should construct a university or a hospital on that place," he added.The Dalit leader also announced that he will meet Chief Minister Yogi Adityanath and impress upon him to agree to the compromise. "There is a need for a permanent solution to the Ayodhya issue and if Hindus and Muslims sit and resolve the matter across the table, it would be better for the society," he said.Mr Athawale added that as both the communities seek a peaceful solution to the issue nothing can happen until they hammer out a compromise . Art of Living guru Sri Sri Ravi Shankar was mediating to resolve the Ayodhya issue and even met Mr Adityanath yesterday in Gorakhpur. UP Central Shia Waqf Board chairman Waseem Rizvi also has submitted a formula in the Supreme Court saying that a mosque should be built in Lucknow instead of Ayodhya and the entire disputed land should be given to the Hindus for Ram temple.