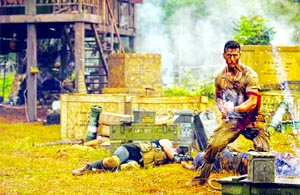 Sajid Nadiadwala and Fox Star Studios action entertainer Baaghi 2 is inching closer to the 150 crore mark at the Indian Box Office. Powered by high octane action and stunts, the action superstar Tiger Shroff made his maiden century with at the Box Office in India Baaghi 2. Sajid Nadiadwala’s ‘Baaghi 2’ that released on Friday has shattered the box office with its phenomenal opening. The Tiger Shroff starrer is not only the highest opening film of 2018 but also the highest opener for any Gen next star. In just five films, Tiger Shroff has managed to achieve the humungous milestone of almost 150 crores. The action entertainer opened at a phenomenal 25. 10cr, setting a precedent only second to the Khans. Collecting a whopping 112.85cr crores on its opening week, ‘Baaghi 2’ is unstoppable at the box office.The action entertainer continued to dominate the theaters, collecting 35.6cr making the weekend collection of 148.45cr at the box office. Staying strong over the week, Baaghi 2 collected 3.8 crores on Monday, 3.4 crores on Tuesday, 3.1 crores and 2.8 crores on Wednesday and Thursday respectively. Sequel to the 2016’s Baaghi, Baaghi 2 took the action a notch higher with its second installment and enhanced the action for the audience showcasing Tiger Shroff in a more muscular avatar than the prequel. Tiger Shroff and Sajid Nadiadwala strike a hat-trick as the duo collaborated for the third time after delivering hit films like ‘Heropanti’ and ‘Baaghi’. The action film brought to screen the fresh pair of Tiger Shroff and Disha Patani. ‘Baaghi 2’ also features Manoj Bajpayee, Randeep Hooda and Pratiek Babbar in pivotal roles. Co-Produced by Fox Star Studios and Sajid Nadiadwala under the banner name Nadiadwala Grandson Entertainment, ‘Baaghi 2’ is directed by Ahmed Khan and is running successfully worldwide.