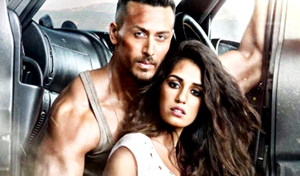 New Delhi, Continuing with its stupendous run at the box office, 'Baaghi 2' has earned a stupendous Rs 73 crore in India in its opening weekend, the highest for an action movie, trade sources said on Monday. The film, which earned Rs 25.10 crore on its opening day, collected Rs 20 crore and Rs 28 crore on Saturday and Sunday. The total earnings of the film in the opening weekend were Rs 73 crore. Trade sources put the response to the film as stupendous. The opening weekend figures of the film compare with some of the biggest action entertainers like ‘Tiger Zinda Hai’ (114.93 crore), ‘Dhoom 3’ (Rs 101.61 crore), ‘Bodyguard’ (Rs 88.75 crore), ‘Kick’(Rs 83.85 crore) and ‘Singham Returns ‘ (Rs 78 crore). In fact, the film has crossed the opening weekend figures for mega stars like ‘Krrish 3’ (Rs 72.8 crore), ‘Bang Bang' (Rs 71.72 crore), ‘Agneepath’ (Rs 67.50 crore) and ‘Ek Tha Tiger ‘ (Rs 60.42 crore). Trade sources attribute the excellent opening taken by the film to its 'jaw dropping ' action stunts, a brilliant Star cast and sparkling chemistry between Tiger and Disha. The film has taken one of the best starts ever in the history of recent Bollywood releases. It had gone past the opening day earnings of Sanjay Leela Bhansali's 'Padmaavat ', which earned Rs 18 crore. The film has also opened to an excellent response overseas. Trade sources said the opening day earning of the film in West Asia is 325000 dollars, the second highest opening day collections in West Asia after 'Padmaavat '. The film had a higher opening day collections than 'Jolly LLB 2' and ' Judwaa 2'. In New Zealand, the film collected 63,458 NZ dollars on the opening day, the second highest opening day figures after 'Padmaavat ', which had earnings of 63,769 NZ dollars on its opening day. 'Baaghi', produced by Sajid Nadiadwala, is also the biggest ever release for Tiger with over 3,500 prints released all over the country.