Bagroda industrial area near Bhopal to get distinct identity 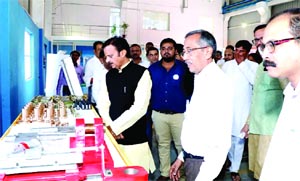 Chronicle Reporter, Bhopal Industrial Minister Rajendra Shukla said that about Rs 60 crores have been spent on infrastructure development works to develop Bagroda industrial area near Bhopal. Bagroda industrial area has fully developed infrastructure for industries. This industrial area will be recognized as a leading industrial area in the state. Shukla was here to inaugurate the Rs 25 crore hydro turbine plant Schimmer set up in Bagorda industrial area. Shukla said that nearly 450 industrialists have been allotted land in Bagroda industrial area out of which nearly 60 units are under construction. He said that in the next three months business production will begin in all industrial units. Director of Schimmer Hydro Turbine Unit Dinesh Rajput told that the hydro turbine prepared in this unit will be used to produce electricity from water in Himachal and Uttarakhand. He told that help is being taken from Italy in technology in turbine production. Currently hydro turbine is being produced in BHEL only. This is the first unit in the private sector to produce hydro turbine. As many as 75 persons will get direct employment in this unit. Chairperson of Schimmer Hydro Turbine Unit Sushri Nandini Rajput assured that local persons will be provided more employment opportunities. The Industry Minister inspected the plant also. Kolhapur (Maharashtra) MLA Rajesh Cheersagar, local MLA Rameshwar Sharma and Managing Director AKVN were also present on the occasion.