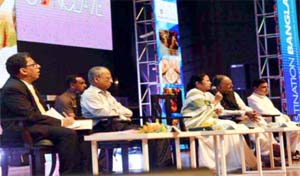 Kolkata, The West Bengal government will initiate “single window video conference” between a group of senior officials in Kolkata and representatives of the business houses in the districts every month with a target of creating one lakh new Micro, Small and Medium Enterprises (MSME) entrepreneurs in the next two years. According to Dr Amit Mitra, the state MSME and Textiles minister, “Alapan Bandyopadhyay, Additional Chief Secretary of MSME and Textiles department, along with officials of all the concerned departments including Power, Land and Land Reforms and Environment departments will hold video conference with representatives of business houses from the districts on the first Monday of every month.” In the same breath, he said it will help in solving problems within a very short time and entrepreneurs will get a major platform to share their views so that the state government can take necessary steps to support them as much as possible. Dr Mitra said around 9,000 items were displayed in 70 stalls in the exhibition of handicraft goods that was organised during the Conclave and overseas order worth Rs 113 crore was received in only one day. At the same time, five Memorandums of Understanding (MoU) were signed between West Bengal State Export Promotion Society and Engineering Export Promotion Council, Calcutta Gems and Jewellery Welfare Association, Paridhan Garment Park Welfare Association, Council for Leather Exports and Manjusha. Moreover, the Bengal government signed MoU with the National Stock Exchange (NSE) and Bombay Stock Exchange (BSE) for migration of MSMEs to the IPO level. This comes at the time when the state government has decided to set up another 30 MSME parks on around 2,000 acre of land. At the same time, initiatives are also being taken to ensure loan for MSME sectors from co-operative banks. The bank borrowing in the state’s MSME sector in 2017-18 was Rs 44,000 crore while the target was Rs 38,000 crore. With the possibilities of the support to be extended by the state Co-operative banks, the same is expected to go up to Rs 80,000 crore in the next two fiscal years.