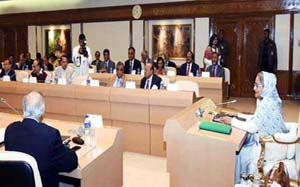 Dhaka, Bangladesh Cabinet on Monday approved the draft of a revised cyber security law incorporating provisions which, officials said, were found to be left out in the existing law to prevent cyber crimes. The weekly cabinet meeting with Prime Minister Sheikh Hasina in the chair approved the draft of the Digital Security act-2018 with officials saying it would protect the country's critical information infrastructure (CII) simultaneously containing the cyber crimes. The 'Digital Security act-2018' has been formulated to combat the growing cyber crimes also affecting many public and private organizations including the central bank," Cabinet Secretary Md. Shafiul Alam told UNI at Bangladesh Secretariat after the meeting. He said the proposed law was formulated as the existing one on ICT slipped away many aspects of cyber crimes.Alam said crimes committed by using electrical, digital, magnetic, optical, biometric, electrochemical, electromechanical, wireless and electromechanical technology would come under the purview of the proposed law. The top bureaucrat of the country said the cabinet today also gave final approval to the draft of the 'Constitution (seventeenth amendment) Act, 2018'.