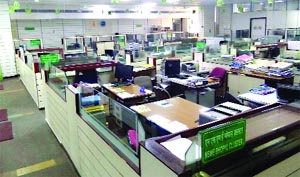 Chronicle Reporter, Bhopal, The 2-day bank strike continued in the state capital on the second day on Thursday. The bank employees are observing nationwide strike on a call given by United Forum of Bank Unions. Banking services in the state were affected on Thursday too as bank employees continued their nationwide strike for the second day protesting a meagre 2 per cent wage hike offered by the Indian Banks’ Association (IBA), representing management. Employees and officers from branches of various public banks, are on a two-day nation-wide strike since Wednesday. Across the country, close to 10 lakh employees and officers of 21 public sector banks, 13 old generation private sector banks, six foreign banks and 56 regional rural banks are on a two-strike. With the employees of nationalized banks on a two-day strike to press their demand of five-yearly revision of wages, bank transactions worth Rs 900 crore were estimated to be affected in the state. Around 5,000 bank employees from Bhopal and adjoining areas took part in the protest here on Wednesday. V K Sharma, Madhya Pradesh coordinator of United Forum of Banks Unions said: “This year, the increment in salary given by Indian Banks Association (IBA) was only 2% as compared to 15% last year. This is an insult to us and our hard work. We are protesting to demand for the long overdue five-yearly revision of wages and a substantial increment in the current salary.” Sharma further added, “A total of Rs 6 lakh 21 thousand crore bank deposits and advance was hit because of the strike. In the year 2016-17, bank employees helped incur a gross operational profit of Rs 1 lakh 59 thousand crore, but all our hard-work was overlooked by IBA.” With their slogan- ‘Sammanjanak Vetan Samjhota Sheeghra Karo ‘-the employees demanded Centre fulfil their demands. “We don’t wish to harass the public. We will end this strike after Thursday. But, it is a warning to government to take necessary action, else we will hold more protests and strikes. It’s not our hobby to sit on strikes, we just want our demands to be taken care of,” said Sharma.