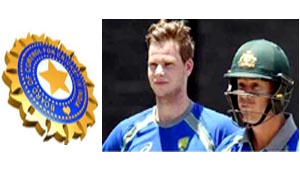 New Delhi, After Cricket Australia (CA) banned Steve Smith and David Warner for their role in ball-tampering scandal against South Africa in Newlands, the BCCI on Wednesday barred the duo from taking part in the upcoming edition of the Indian Premier League (IPL). Earlier, both Smith and Warner were supposed to lead their respective franchises Rajasthan Royals and Sunrisers Hyderabad in eleventh season the cash-rich league but the duo had to step down in the wake of the scandal. Talking to mediapersons, IPL chairman Rajeev Shukla said,"They (Cricket Australia) have banned two players and we are also barring these two players from this year’s IPL. We wanted everything in our own hands. First, we waited for ICC’s decision, after that Cricket Australia and then we decided on the matter." "We have decided to bar them from this season. The replacements will be made available to the two teams. We did not take any decision in haste, it was a well thought out decision," added Shukla. Smith and Bancroft, the third accused in the ball-tampering fiasco, have been also punished by the International Cricket Council (ICC) and all the three cricketers have been asked to return back to Australia ahead of the fourth and final Test against host South Africa in Johannesburg beginning Friday.