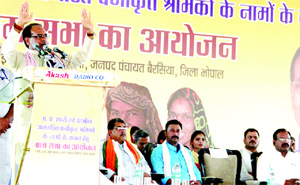 Chronicle Reporter, Bhopal Speaking at the special gram sabha held at Gunga village of Berasia tehsil in Bhopal district, Chief Minister Shivraj Singh Chouhan said that eligible beneficiaries of the Unorganized Workers Welfare Scheme will be provided benefits in gram sabhas to be organised on June 13. After this the work will continue. Chouhan said that in order to empower women self-help groups, the State Government will pay 3 per cent interest of the groups. The Chief Minister said that on June 10 this year, the farmers who are selling wheat will be given an incentive of Rs. 265 per quintal. He said that the incentive amount of Rs. 100 per quintal is also being given on the support price of gram, lentil and mustard. Chief Minister Chouhan said that the unorganized labour welfare scheme has been set up by the state government for the welfare of the workers. Under this scheme all the benefits of different schemes of the government will be given to the members of the labourers’ families. Pattas will be given to the labourers to stay and in the next four years, they will be given pucca houses. The Chief Minister told the villagers, particularly the labourers to educate their children. He told them to extend their cooperation in Prime Minister Narendra Modi’s Swachhata Abhiyan. He urged them to save water and plant saplings. Everyone should unitedly build a new Madhya Pradesh. The Chief Minister distributed benefits of various schemes to the poor beneficiaries and labourers on this occasion. MP Alok Sanjar, MLA Vishnu Khatri, District Panchayat President Manmohan Nagar, Chairman of Nagar Panchayat President Berasia Rajmal Gupta, Janpad President Smt. Bhagwati Gurjar, Mandi Chairman Satyanarayan Yadav, Sarpanch Smt. Sunita Patel besides a huge number of villagers and labourers were present at the gram sabha.