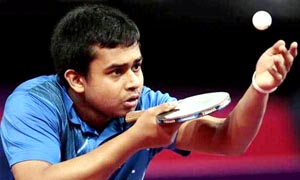 Kolkata, West Bengal police is considering to summon Table Tennis player Soumyajit Ghosh, following an FIR filed by a teenager, charging him of rape, with a police station in North 24 Parganas. An FIR has been lodged with the Barasat women's police station, where the Arjuna awardee paddler has been booked under the IPC sections for rape, criminal conspiracy, causing miscarriage without the woman's consent and cheating. The allegations have been leveled by the 18-year-old girl and her father. Soumyajit Ghosh, former national champion from Siliguri in north Bengal, is training in Germany for the April 4-15 Commonwealth Games in Gold Coast. Though Ghosh denied the allegations, he may be summoned by the West Bengal police to face questions after the complaint lodged against him. This was a second Indian player embroiled in woman related affairs after India's fast bowler Mohammed Shami was accused of torture and domestic violence against his wife Hasin Jahan.