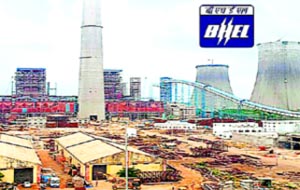 Agencies, New Delhi, Bharat Heavy Electricals Limited (BHEL) has awarded twin boiler equipment orders to GE Power’s Steam Power business for supercritical thermal power projects at Patratu in Jharkhand and Udangudi in Tamil Nadu.GE Power India Limited (GEPIL) will have $ 68.3 million stake in the combined order value of $72.4 million. BHEL is executing Engineering, Procurement and Construction (EPC) contract for a Phase-I expansion of Patratu Vidyut Utpadan Nigam Limited’s (PVUNL) 2,400-MW Supercritical Thermal Power Station (STPS) at Patratu and for the first stage of a proposed 1,320-MW Supercritical Thermal Power Plant at Udangudi by Tamil Nadu Generation and Distribution Corporation Limited (Tangedco). As part of the order, GE Power will supply pressure parts equipment for the Patratu project at an order value of $52million and to Udangudi thermal power projects at a value of $20.4 million, for onshore supply. The equipment, including pressure parts, for both these projects will be sourced from GE’s state-of-the-art manufacturing facility in Durgapur, West Bengal. Commenting on the order wins GE Power India Limited Managing Director Andrew DeLeone said, “This is a key milestone in our partnership with BHEL on supercritical boiler technology for thermal power plants. For a country like India, where coal is and will remain the energy mainstay for a long time, GE’s state-of-the-art technology can play a major role in making the thermal power plants efficient and environment friendly.” The expansion of Patratu Supercritical Thermal Power Station will take place in the town of Patratu in the Ramgarh District of Jharkhand in northeast India. The Udangudi Supercritical Thermal Power Plant project is located in the Thoothukudi District of Tamil Nadu, at the southern-most tip of the country. Units 1 and 2 of the Udangudi project are scheduled to be commissioned by June 2021, while Patratu plant’s Unit - 1, 2 and 3 are scheduled to be commissioned by March, 2022, September 2022 and March 2023, respectively. After the commissioning, the addition of 3700 MW of cumulative power generated from both Udangudi and Patratu supercritical power projects will help in providing easy access to electricity to the people of Tamil Nadu and Jharkhand while lighting up approximately 10 million homes in the country. GE Power’s Steam Power business has executed multiple projects for BHEL in the past and is a Licensor for Once-Through-Boiler technology for the EPC company. A License and Technical Assistance Agreement between GE and BHEL is in place since October 2005 and is valid till October 2020. In May 2017, GE had won the US$40 million order from BHEL to supply components and services for the supercritical steam generator island package for 2x660MW coal – based Maitree Super Thermal Power Project located in Bangladesh.