Bhonrasa to become Tahsil and Tonkkhurd to be developed by Rs. one crore: CM 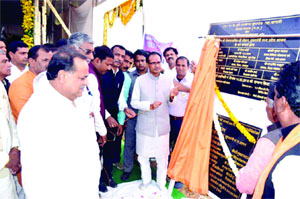 Chronicle Reporter, Bhopal Chief Minister Shivraj Singh Chouhan made announcement to give tahsil status to Bhonrasa and Rs. One crore for the development of Tonkkhurd. Shri Chouhan participated in district level Antodaya Mela held at Tonkkhurd today. Rent to Store Crops in Warehouses to be borne by the Government CM Chouhan said that there is no need for farmers to sell their crops immediately. The state government will also bear warehouses’ rent to facilitate farmers to store their crops. Twenty five percent amount of the crop value, stored in the warehouses will be paid to farmers in advance. Farmers Must Undertake other Professions besides Farming Chief Minister Chouhan said that farmers must undertake other professions besides farming. He mentioned that loan from Rs. 25 lakh to 2 crore will be provided to do other business linked with the agriculture under the Mukhya Mantri Krishak Udhyami Yojana. Guarantee against the loan will be given by the government and 15 percent subsidy will also be given. He further informed that a target has been set to benefit about 30 thousand youth of the state under the scheme. Chouhan stated that farmers will be provided Rupay-Cards in place of credit cards. Moreover, micro ATMs will be opened in the identified societies. Chouhan released a book ‘Bangi’ on the occasion and performed Kanya Poojan. Panchyat Secretaries and Rozgar Sahayaks of the district expressed gratitude towards the CM Chouhan by garlanding him for accepting their demands. Distributes Benefits of Rs. 173 crore to 30 thousand 581 Beneficiaries CM Chouhan also benefitted 30 thousand 581 beneficiaries of the district at Antodaya Mela. Benefit of about Rs. 173 crore was distributed to the beneficiaries. Moreover, Chouhan laid foundation and dedicated development works worth Rs. 150 crore approximately on the occasion. Among those who present on the occasion include MLAs Rajendra Verma, Champalal Devda, Ashish Sharma, President Jila Panchayat Narendra Singh Rajput and Mayor Subhash Sharma.