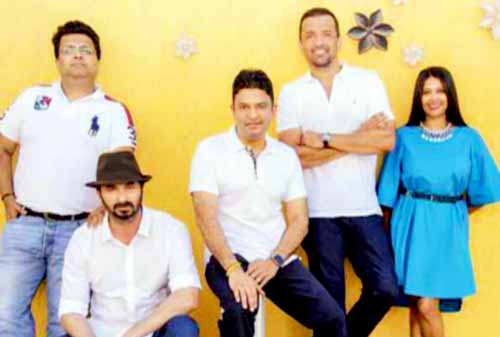 New Delhi, Producers Bhushan Kumar, Atul Kasbekar, Tanuj Garg, and Swati Iyer Chawla on Monday announced that they have come together to make a war film titled as 'Navy Day'. The movie which will be helmed by Razneesh Ghai, is based on an attack launched on Karachi harbour during the India Pakistan war in 1971. Taking to micro-blogging site Twitter, T-Series honcho Bhushan Kumar said,'Extremely delighted to announce "Navy Day", our next venture celebrating the Greatest Naval Operation by the @indiannavy - the bombing of Karachi Harbour in 1971. Helmed by Razneesh Ghai.@EllipsisEntt #KrishanKumar @tanuj_garg @atulkasbekar #SwatiIyer #AsylumFilms #NavyDay'. Ellipsis Entertainment said,'@TSeries & Ellipsis to produce "NAVY DAY"... celebrating the BIGGEST NAVAL OPERATION by the @IndianNavy to bomb the #Karachi harbour in 1971. Director: Razneesh Ghai. Producers: @itsBhushanKumar, Krishan Kumar, @tanuj_garg, @atulkasbekar, @swatiiyer, Asylum Films.#NavyDay'. Atul Kasbekar said,'Our biggest project yet at @EllipsisEntt..The bombing of Karachi harbour during the ‘71 war Possibly the most audacious naval mission in our maritime history'. Tanuj Garg said,'Salute our @indiannavy by chronicling the BIGGEST NAVAL OPERATION EVER - the bombing of the #Karachi harbour in 1971.@TSeries and @EllipsisEntt announce "NAVY DAY", an epic saga of strategy, thrill and bravery. To be directed by Razneesh Ghai, shooting starts in 2020.#NavyDay'. The movie will go on floors by mid-2020, and the makers are yet to finalise and announce the cast. The flick is going to be well mounted on lavish sets and is slated to be huge on content, rife with crackling action scenes.