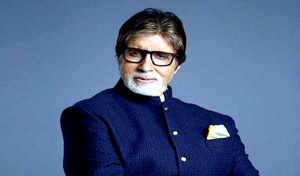 New Delhi, He may have time and again expressed his disinclination to enter the political arena but superstar Amitabh Bachchan's decision to follow leaders from the Congress, the Nationalist Congress Party, the National Conference and the Aam Aadmi Party has led to speculation of his renewed interest in happenings in the political arena. Of late, the megastar has started following several Congress leaders, including party president Rahul Gandhi and senior leaders P Chidambaram, Kapil Sibal, Ahmed Patel, Ashok Gehlot, Ajay Maken, Jyotiraditya Scindia, Sachin Pilot and CP Joshi from this month. He has also been following party spokespersons Randeep Surjewala, Priyanka Chaturvedi and Manish Tewari and Congress leaders Shakeel Ahmed and Sanjay Jha on Twitter. In fact, Manish Tewari thanked Mr Bachchan for following him. "Thank you Sh Amitabh Bachan for following me and it is my privilege to follow the icon of Indian cinema who we grew up watching first-day first-show every new release. Those days in the late 70s & early 80s a balcony ticket in Chandigarh was Rs 3. Unbelievable today! @SrBachchan," he tweeted. Of late, the superstar has also started following leaders of several opposition parties. These include RJD chief Lalu Prasad Yadav, his daughter Misa Bharti, his son Tejaswi Yadav, JD(U)'s Nitish Kumar, CPI-M's Sitaram Yechury, NC's Omar Abdullah and NCP's Supriya Sule. He has also been following the official twitter handles of the RJD, the YRS congress party and the Telugu Desam Party. Further, he has also been following AAP leaders Manish Sisodia, Gopal Rai, Sanjay Singh, Kumar Vishwas, Atishi Morlena and Ashish Khetan.Considering that Mr Bachchan, who has over 30 million followers on Twitter, follows only 1,689 people, his following leaders of several opposition parties has triggered speculation of his renewed interest in politics. It is notable that the superstar had a brief stint in politics in the 1980s when he, at the insistence of his close friend and former Prime Minister Rajiv Gandhi, contested Lok Sabha polls in 1984 and defeated veteran politician HN Bahuguna from Allahabad. However, after allegations of his and his family's involvement in the Bofors scam surfaced, he resigned from his seat and quit politics. Mr Bachchan and his family were once close to the Nehru-Gandhi family and he was a friend of Rajiv Gandhi.However, in recent decades, he has drifted away from the congress with the party recently attacking him on the Panama papers revelations. Trade sources, however , feel no political meaning should be seen in the superstar following these leaders as it could be a part of his endeavour to keep himself abreast of the political happenings in the country. In fact, the superstar also follows a number of BJP leaders.Of late, he has started following union ministers Piyush Goyal, Nitin Gadkari and Suresh Prabhu. He is also following the official twitter handle of the Ministry of Railways and urban development.