Biggest Airport, after Mumbai, to be developed in Mopa, Goa 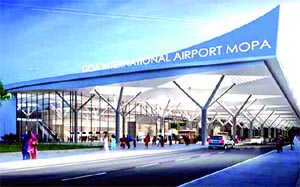 Agencies, New Delhi Government will develop the biggest Airport, after Mumbai, in Mopa, Goa for which a joint team of the Airports Authority of India (AAI) and Commerce Logistics Department will visit Goa on 7th-8thMay 2018 to facilitate the development of cargo hubs at the new airport. According to a statement issued by Ministry of Civil Aviation, the team will meet Goa Chamber of Commerce and Industries to work together in order to leverage the advantages the State offers in terms of connectivity to the coastal belt of Western India. The four coastal states in the western part of the country, Maharashtra, Karnataka, Kerala and Goa, will benefit greatly from the biggest airport, after Mumbai,to be constructed in Mopa. Minister of Civil Aviation Suresh Prabhu had announced last week that Goa will become a logistics hub of India after a second airport becomes functional in 2020 in the state. The two airports in Goa, at Dabolim and Mopa, will help position the State as a logistic hub.Mopa airport will have the capacity to handle 30 million passengers annually as well as cargo. The Minister stated that the cargo policy to be announced by the Government of India will help to contribute 40 per cent of India’s GDP from global trading. Dabolim airport will also be upgraded with an investment of about 600 crores.