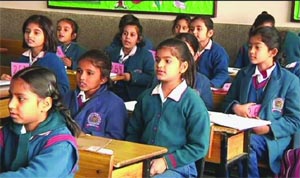 Fee up to 10 percent increase permissible for Private Schools

Chronicle Reporter, Bhopal The state government has issued notification to implement Madhya Pradesh Private School Bill -2017 in order to prevent private schools from unanticipated fee increase. This bill has come into effect from February 22. According to the main provision of the bill, the school management can increase fee up to 10 percent limit over the fee fixed for the previous year. If school management proposes to raise school fee between 10 to 15 percent as compared to the previous year, then it is essential for the school management to obtain approval from the district committee formed under the chairmanship of district collector. Similarly, if school proposes increase of over 15 percent in the fee, then approval is required from the state committee formed under the chairmanship of Commissioner Public Instructions. District committees formed in connection with the fee and related issues can conduct an enquiry in the cases of violation of fee related rules and complaints. If committee finds that the fee, more than the prescribed rule is being charged by the school management then the committee can issue order to the school to refund it to the parents. Along with this, district committee has been empowered to impose penalty up to Rs. 2 lakh. Moreover, in case of non-compliance of first order, second order for refund can be issued by the committee and a penalty of up to Rs. 4 lakh can be imposed. After the non compliance of the second order, the committee can impose a penalty up to Rs. 6 lakh and can send recommendation to the competent authority for suspension and cancelation of recognition of the private school. This decision of the schools education department will control the trend to collect money under various heads in the name of fee and unanticipated fee increase by the private schools.