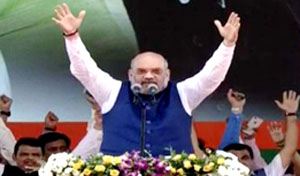 Mumbai, Launching its election campaign for 2019, Bharatiya Janata Party president, Amit Shah exhorted party workers to take a pledge to ensure BJP regains power with full majority to realise Prime Minister Narendra Modi’s dream of ‘New India’, here on Friday. Addressing a mammoth rally to mark the BJP’s 38th 'Foundation Day' here, Mr Shah said 'the countdown' to the Lok Sabha elections next year has already begun and called upon all activists to fan out to each village in the country and highlight the achievements of the Modi sarkar in the past four years. 'We don’t want to fight the next elections on slogans or empty poll promises, but on the basis of the achievements of the Modi government," he said. 'We take a pledge to ensure victory for the BJP in the next elections in 2019 all over India and in assembly elections in Odisha and West Bengal.. and even for Chief Minister Devendra Fadnavis’ government in Maharashtra to regain power , that will be the dawn of the ‘Golden Period’ of the BJP," Mr Shah said. Criticising the ongoing efforts by various opposition parties which are forging unity before the next elections, he said 'when there is a flood, all creatures climb to one spot for survival.'. 'Since 2014, there is a political flood unleashed by Modi. The Congress has been uprooted in eleven states, and the BJP has been winning all elections since now all parties are attempting to unite against him and fight the elections,' Mr Shah said with a laugh. Attacking Congress President Rahul Gandhi whom he referred to as ‘Rahul Baba’, the BJP President said ,'he has been given 'an injection' by (NCP President) Sharad Pawar, so now he’s going around asking what Modi has done in the past four years.' 'Rahul Baba, we want to ask you ‘What did your party do when it was in power for four generations’, the people of the country want to know this?' Mr Shah questioned. Replying to Gandhi’s apprehensions that the Centre is attempting to strike out the SC/ST act, Shah declared that the BJP will never remove reservations from the country, and will strongly oppose if any other party attempts to do so. Highlighting the NDA’s achievements under Modi, he pointed out that 'at Centre and in Maharashtra, the BJP has provided a clean,non-corrupt, all-inclusive government, which the corruption-ridden governments could not do for decades." He has also given details of the various schemes of the Modi government which have benefited the poorest of the poor in the country, "the Rs.500,000 insurance for 50 crore poor families,electricity connection to 10 crore homes, and unprecedented higher remuneration for agriculture produce across the country.'