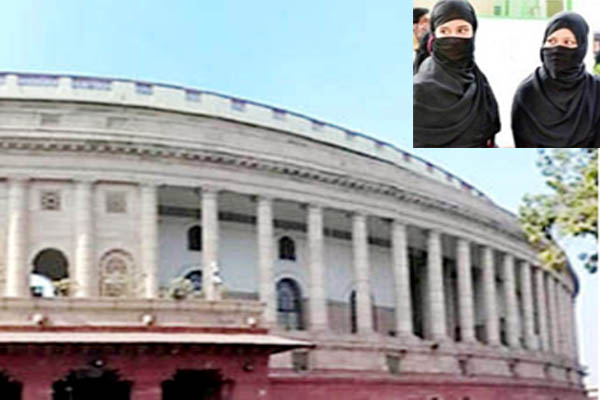 New Delhi, BJP on Monday attacked Congress and Opposition for doing politics over the Triple Talaq Bill.Amid protest by TDP and YSR Congress MPs over demand of special status to Andhra Pradesh, BJP MP Rakesh Singh initiated a debate in the Lok Sabha on the Motion of thanks to the President’s address to both Houses of Parliament on January 29. Initiating the debate, the BJP member said the Union Government has brought a Bill to declare instant Triple Talaq illegal but the Congress and Opposition are doing politics over it. He said the Union Government brought Ujjwala scheme which aims to provide cooking gas to poor households. Mr Singh said the Government has increased the period of maternity leave from 14 weeks to 21 weeks. He said the Government has taken steps to increase the farmer's income and the Government is committed to doubling of farmers’ income by 2022. The BJP member also made a reference to Soil Health Card scheme. The BJP member said the present Government brought Pradhan Mantri Jan Dhan Yojana which aims to link poor people with the banking system. He welcomed President Ram Nath Kovind stressing the need for a sustained debate on the issue of simultaneous elections to the Lok Sabha and various state assemblies during his address on January 29.The BJP member said elections held at different time adversely affects the economy and development.