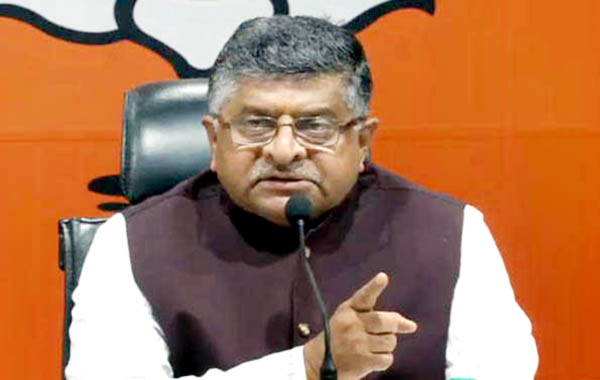 New Delhi,After months of one-upmanship between the Congress and the government on Rafale deal, the BJP on Monday virtually fired 'Eurofighter missile' at the Congress President Rahul Gandhi and accused that all talks about Rafale is nothing but aimed at serving the 'commercial interests' of Rafale's rival company. "The entire bogey of falsehood campaign against Rafale is now clear ....it is accentuated by extraneous considerations," BJP leader and Union Law Minister Ravi Shankar Prasad told reporters here in reference to media reports alleging that the AgustaWestland scam middleman Christian Michel was also lobbying for the Eurofighter to win the same deal for 126 jets. The reports claimed that Michel and an associate had prepared a 'strategy paper' to reach out to an influential 'political navigator' and Indian Air Force officials to tilt the contract in favour of Eurofighter. The Eurofighter Typhoon consortium, according to company website, brings together the brightest minds in European aerospace in order to create a world class weapon system. It is built on the strength of four European nations: UK; Germany; Italy and Spain, and their leading aerospace and defence companies, the website says. The Law Minister Mr Prasad said: "The available documents in public domain raise serious suspicious circumstances of the intention of Rahul Gandhi and the Congress party". "It is too well known that the Congress party has never been happy unless there is a deal in a defence deal," he said eloquently and cited instances of various defence scams including Bofors, submarine and AgustaWestland chopper. However, he said now in the case of Rafale row - and persistent allegation of corruption against the Prime Minister Narendra Modi and the BJP -, he said, ".....it is evident that there was a close proximity of the middleman who were pushing the case of Eurofighter in contrast to Rafale". "In this light the entire bogey of falsehood, entire campaign of canard unleashed by Rahul Gandhi in particular and the Congress party is completely false and based upon pure commercial competition interest," Mr Prasad alleged. On the same issue, earlier in the day Union Information and Broadcasting Minister Rajyavardhan Rathore also had tweeted saying: "BIG: Agusta middleman Christian Michel was lobbying for Eurofighter against Rafale! Is this why Congress has been spreading misinformation on the Rafale issue?".