BJP, JD(S) working towards forming coalition government, but it is an illusion: CM 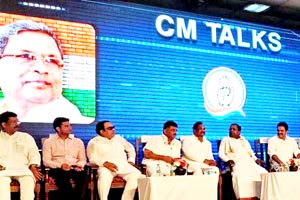 Bengaluru, Realising that they were on the losing side in the May 12 Assembly elections in Karnataka the Bharatiya Janata Party and Janata Dal (S) have already working out a strategy of forming a coalition government but it is nothing but an ‘illusion’ as Congress party is poised to win a clear majority and retain power, chief minister Siddaramaiah said on Saturday. Speaking at the release of reality mobile app ‘CM Talks’ here he said the two parties had realised that they were not in a position to gain majority as Congress was on a surge to retain power. ‘’BJP has nothing to claim on the achievements either at the centre pr in the States ruled by that party. They have not harped on a single positive issue of the union government which is in power for the last four years. So they are resorting to reeling out ‘lies’ against my government. ‘’Now they are working out a strategy to form a coalition government with JD(S). But it is nothing but an illusion and they will realise it soon,’’ he said. On prospects of JD(S), Mr Siddaramaiah rejected it as a ‘regional outfit’. ‘’This party do not have pan-Karnataka presence and at the best can win a few seats in selected districts like it did before. So its performance will end there,’’ he said. He said people will vote Congress back to power as the party had given transparent and clean governance with the sole agenda for development. ‘’The party is now working on how to take Karnataka further forward during the next five years. Peace has prevailed in the state under Congress rule. I am confident that people are impressed with my rule and vote my party to power again,’’ he said. Later speaking on the sidelines of the function, Mr Siddaramaiah said he had already informed the party high command that he would contest only from his home segment Chamundeshwari. But party leaders and others were bringing pressure on the high command to nominate me from a second segment in the region like Badami. ‘’I will go by the direction of the High Command’’. He said he had campaigned in Chamundeshwari for the past two days and the peoples’ reaction was very good. He had contested for seven times in this segment and won five times. But the people reaction was best this time. On BJP leader Prakash Javdekar’s claim that his party had evidence to prove corruption in Congress government, Mr Siddaramaiah challenged him to provide at least one conclusive evidence. ‘’They are speaking only against me as they have nothing to claim after Modi government had completed four years but achieved little. What lessons can we learn from this corrupt BJP which is projecting most tainted Mr B S Yeddyurappa as its chief ministerial candidate, he asked.