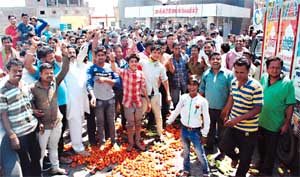 Bhopal: In Karond’s vegetable market two employees of a parking contractor attacked on a Vegetable supplier and on a Helper with a knife and seriously injured them. It is being told that a Parking contractor named Gupta is a leader of BJP. Police have registered a case against 2 unknown accused and they are absconding. According to the Town Inspector of Nishatpura Police Station a complainant named Rais Khan from Gheratganj is a Vegetable supplier. On Friday morning around 7 am, he brought vegetables from his village to Karond Market by Mini Truck. After delivering his items when he was returning out from the Market three unknown person came and said that this is a Parking lot, Gupta ji took the contract of this parking area. They asked for rupees 50 as a parking fare. When Rais refuses to pay money they started fighting. On protest the parking employees started beating him and attacked on him with a Knife and a stick. At the time a person who works in this Vegetable Market as a Helper watching this incident tried to save Rais, but the two accused attacked on him also. Both of them got injured. After committing Crime both the accused escaped from the Market. By that time the other suppliers and traders of Vegetable Market gathered together in large number and started demonstrating against the Provision of parking which was introduced last night. On getting information of ruckus police rushed the spot and tried to control the situation. But After assurance of arrest of the accused the big crowed got silent. Now the police is in search for the two accused.