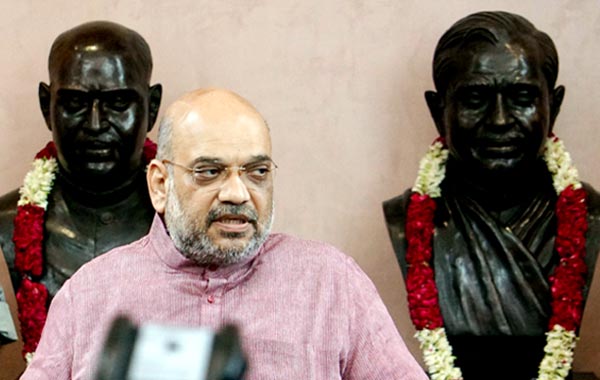 New Delhi, On the occasion of completion of one month of his death, the BJP will organise nationwide poetry recitation programme 'Kavya-anjali' across the country in honour of former Prime Minister Atal Bihari Vajpayee on September 16, BJP chief Amit Shah said here. Mr Shah also said that as September 17 coincides with Prime Minister Narendra Modi's birthday, a week-long special Service Programme will be undertaken till September 25 in honour of BJP's founding president. "BJP will organise Kaya-anjali across the country. In at least more than 4,000 places and all assembly constituencies, the BJP workers will pay tributes to Atalji. The poems penned by Atalji will be recited and also the recording of the same as recited by Atalji will be made available to the people," Mr Shah told reporters here. "There will be Kavi sammelan and also the poems written by poets on the Late Vajpayee will also be recited," he said the programme is being organised to mark first month of the death of Bharat Ratna Vajpayee. Born on the Christmas Day of 1924, Vajpayee breathed his last on August 16. Mr Shah said September 17 happens to be the birthday of Prime Minister Narendra Modi - that BJP workers observe as 'Seva (Service) Day' "This year there will be week long programme. From September 17 to September 25, BJP workers will observe Seva Saptah (Service Week) and also use the occasion to pay tributes to Atal Bihari Vajpayee," he said. During the week long programe, BJP workers will organise medical camp in a nationwide programme in all sum dwelling places. "There will be medical camps, immunisation programme, treatment of children and women. The BJP workers will also launch cleanliness drive in the localities," he said. September 25 also coincides with the birth anniversary of Deen Dayal Upadhyay, an RSS ideologue and a co-founder of the Bharatiya Jan Sangh - the previous version of the BJP, he said. The BJP chief announced that during the week, a campaign will be launched in order to encourage people to associate themselves with Ayushman Bharat scheme - the national health protection scheme, which will cover over 10 crore poor and vulnerable families.