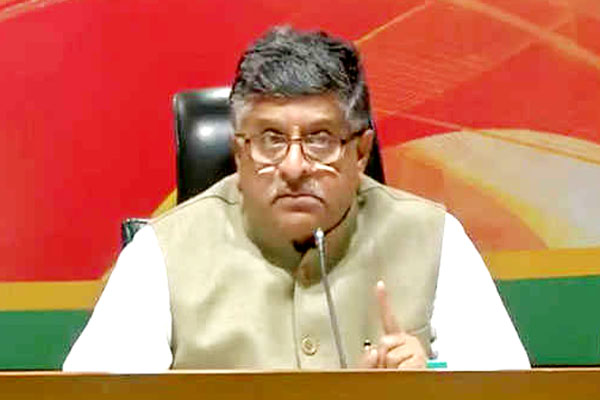 New Delhi, The BJP on Monday sought to puncture the allegations leveled against BJP over Nirav Modi and PNB scam and raised the bogey of another diamond merchant Jatin Mehta and said this businessman had fled India in 2012 during the UPA rule "after CBI had closed its files". "Baat niklegi toh phir dur talak jaegi (If things start coming out, it will go far off)," BJP leader and Union Minister Ravi Shankar Prasad told reporters here Mr Prasad in a sarcastic note further said, ".....if these happen, people of India will then ask Rahul Gandhi why he is so upset about certain things with no cause known in public". Media reports say that Gujarat-based diamond merchant and owner of Winsome Diamonds Jatin Mehta owes more than Rs 6,500 crores to a consortium of banks – with the biggest hit being the Punjab National Bank with a loss of more than Rs 1,700 crore. Mr Prasad lashed out at Congress for trying to pursue its politics of "fear and confusion" among the people and said that the party chief Rahul Gandhi and former Finance Minister P Chidambaram need to answer several questions on the alleged misdeeds of the UPA dispensation. "The conduct needs to be condemned as the Congress party in last four years since we came to power is trying to pursue their politics of fear, confusion and concoction". Charging that the Congress party is often resorting to "shameless" propaganda on Non Performing Assets of banks, he said while there has been "no NPA" for loans disbursed under NDA regime, the "stressed assets" of banks had grown from 36 per cent in 2008 to 82 per cent in first part of 2014 when Congress-led UPA was in power. Mr Prasad wanted to know from Mr Rahul Gandhi and Mr Chidambaram as to why did as the then Finance Minister Mr Chidambaram had allowed RBI sanction to seven jewellery firms allowing them to import gold on May 16, 2014 --- the day election results for the general elections came wherein Congress was routed and NDA had mustered a record majority. "It was found that the entire game was only about round tripping," Mr Prasad alleged. According to market analysts 'round tripping' is a form of a barter that involves a company selling an unused asset to another company, while at the same time agreeing to buy back the same or similar assets at about the same price. "There were attempts to conceal bank records," he said and also charged the erstwhile Congress-led regime with "destroying the banking system under a so called economist Prime Minister Dr Manmohan Singh". "Now they are asking us questions. But the onus is on Rahul Gandhi and Chidambaram to answer on these....Are these only Jumlas or act of corruption," the Minister said.