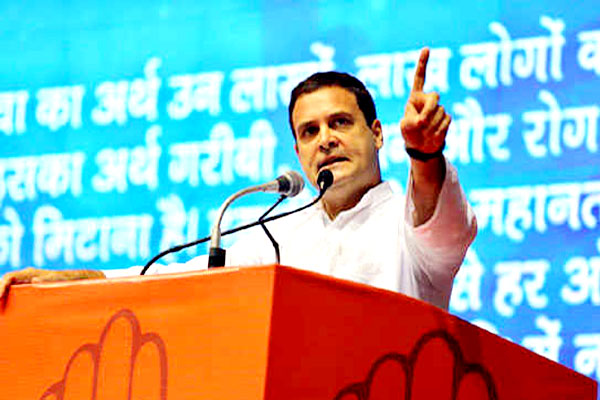 New Delhi, Charging the BJP and the RSS as being gripped with a 'anti-Dalit' and 'anti-Constitution' mindset , Congress president Rahul Gandhi on Monday said that his party would not allow them to destroy institutions in the country. Addressing a gathering here to mark the launch of a 'Save the Constitution' campaign, the Congress president said the people of the country will reveal their 'Mann Ki Baat' in the coming Lok Sabha elections and throw the BJP out of power. 'The Congress party has worked hard over the last 70 years to build the institutions in the country. However, in the last four years of the NDA rule, Prime Minister Narendra Modi has worked to destroy the institutions in the country be it Parliament,the Judiciary or the Election commission. However, no matter how much effort the BJP puts in , we will now allow the Government to destroy the institutions in the country. we will throw them out of government in 2019,' Rahul said in his address to the Congress workers present at the gathering. Charging the PM of having an 'anti-dalit' mindset, Rahul, quoting from one of Mr Modi's speeches contained in the book 'Karamyogi' said, 'in one of his speeches, Modi ji has said people who clean toilets and excreta do so out of their own spirituality rather than just to make their ends meet. In the speech, Mr Modi says that these people could have stopped doing these jobs, but they don't because these jobs satisfy their spiritual side. A man who thinks like this isn't really interested in the welfare of Dalits. I want to tell the PM that dalits are angry at his mindset and no matter how many statues of Babasaheb Ambedkar he garlands, his mindset will remain anti-Dalit.'He said that the atrocities against Dalits in the country have been increasing but the PM had maintained a silence on the issue. 'A PM who sees toilet cleaning as a sign of 'spirituality' does not utter a word on the increasing atrocities on Dalits across the country,' Rahul said. Charging Mr Modi as being obsessed with winning elections and becoming the PM, Rahul said,'Mr Modi isn't interested in the upliftment of Dalits, minorities and women, or in giving farmers fair prices, or in generating jobs. He's just interested in being Prime Minister.'